Greetings and welcome back to the series of posts about my trip to Europe in the Fall of 2016. When I left off, I was talking about playing in Fealty’s pub in Bangor, Northern Ireland in late September 2016. I forgot to say that the fellow who gave me his windbreaker (necessitated by my having left my jacket and coat at home in Brooklyn) in Fealty’s was originally from Arizona, and that it was a dad-windbreaker. The kind of windbreaker that my dad would wear, or your dad, or, if you are a dad, you. And apparently me, because I wore it all through EU, until I found a suitable replacement. (oh yeah. The day I replaced the dad-windbreaker. *that* was a banner day.  Stay tuned for that, you won’t wanna miss it.).

At Fealty’s, I met Rodney and Jennifer Cordner, a wonderful couple from Portadown who took me under their wings for a few days.  I was introduced to them via Facebook through my friend Gary Moorehead of  Massachusetts (It’s worth pointing out, that as much as I think social media contributes to the downfall of society, here’s a decidedly positive thing about it. I was able to easily make 2 lifelong friends because of a mutual friend on Facebook). Rod and Jenny are fun, warm, bubbly, funny, nurturing, creative, and plain old fun. Rod will talk your ear off, and did mine. He loves an audience and has the Irish gift of gab. His dad was from Texas (met Rod’s mum in Ireland, and then, I think left and went back to the US) and Rod never misses an opportunity to remind you that he is part Texan (and part Cherokee as he claims). Rodney is a singer-songwriter as well, and endlessly entertaining. Jennifer is sweet, kind, generous, and possessed of an deep, strong, unconditional love.  She treats Rodney’s hurricane-like conversation style with a bemused forbearance. Jenny has heard his stories before, many times, and has got a few stories of their own, as it happens. Neither Rod nor Jenny ever met a stranger. They drove me around, fed me, housed me, and took me sightseeing. Rodney lent me his guitar (“a teckaminny”) for that first gig. Oh and they taught me some of the lingo, which I drank in in wonder, as I drank in everything in wonder.

Here’s some Irish lingo I learned:

They Irish say “wee” a whole lot. Every sentence, like (That’s another Irish-ism, putting “like” at the end of a sentence like that): A wee spot of tea. a wee bit of juice. a wee walk, a wee gig.
“How’s about ya?” means “How are you?”
“What’s the craic?” means what’s going on or where may a good time be found.
“a brave drop of soup” is a big, hearty, bowl of soup.
someone who is incredibly drunk is “bleuthered.”
Someone who has “popped his clogs” has died.

First on the sightseeing agenda was the Mountains of Mourne, or Mourne Mountains, in County Down. It’s a granite mountain range in the Southeast part of NI, full of misty Celtic myths, Game of Thrones filming locations, endless stone walls, and sheep. 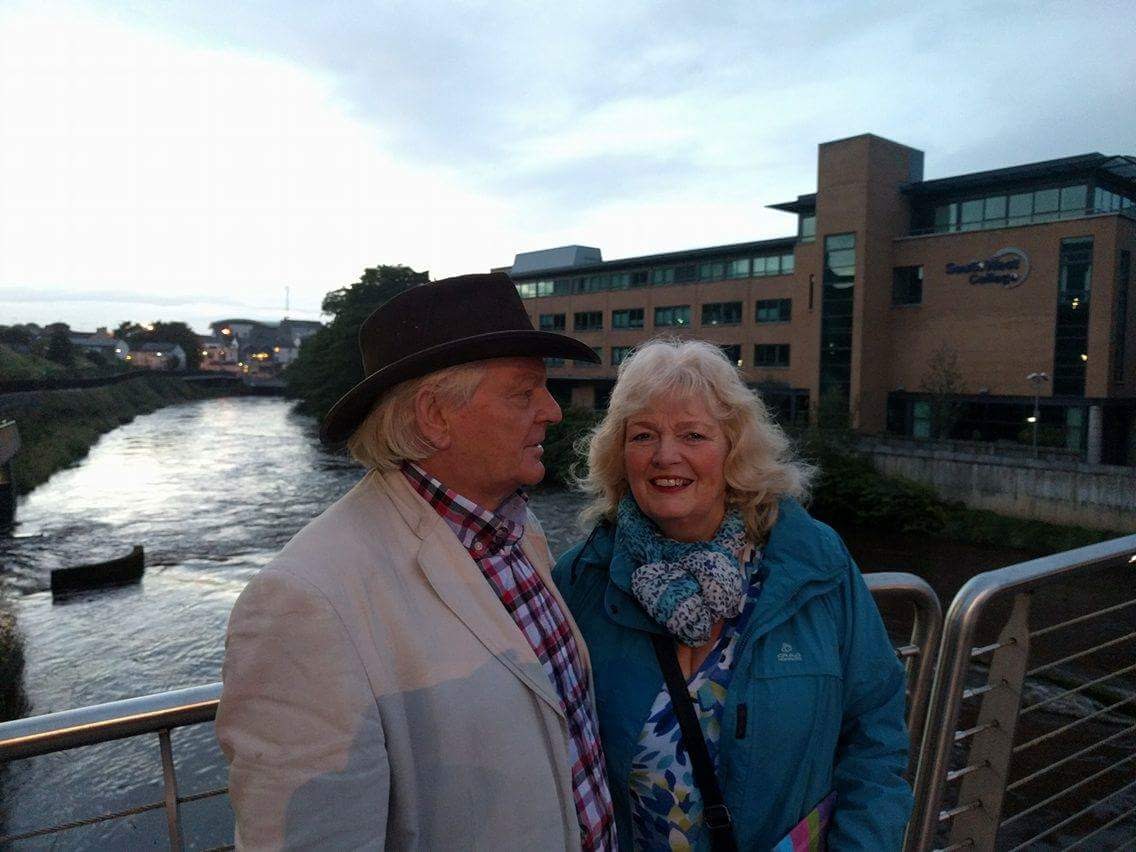 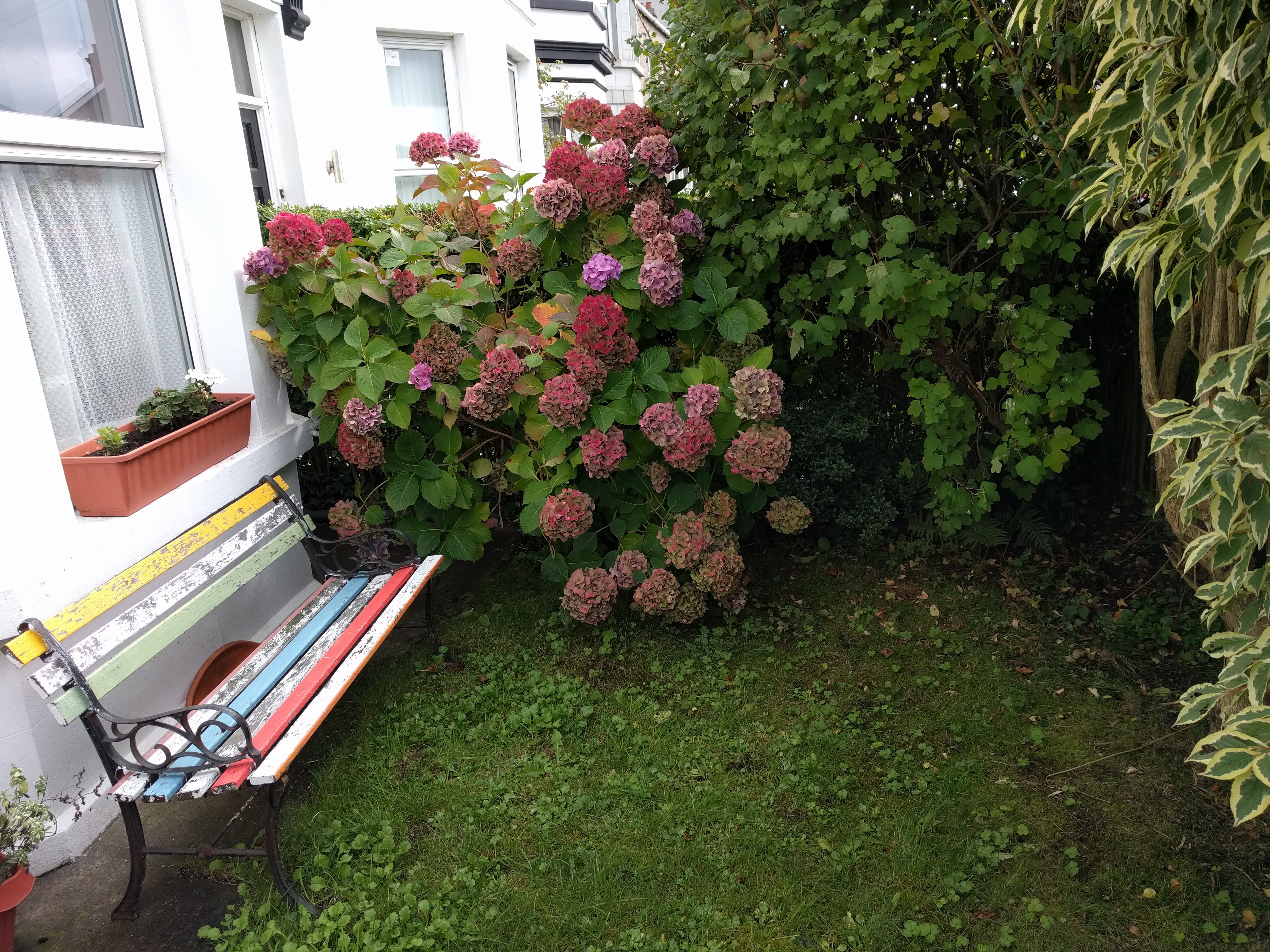 This was a resort town where we stopped for tea on the way to the Mts.. can’t remember the name of it. 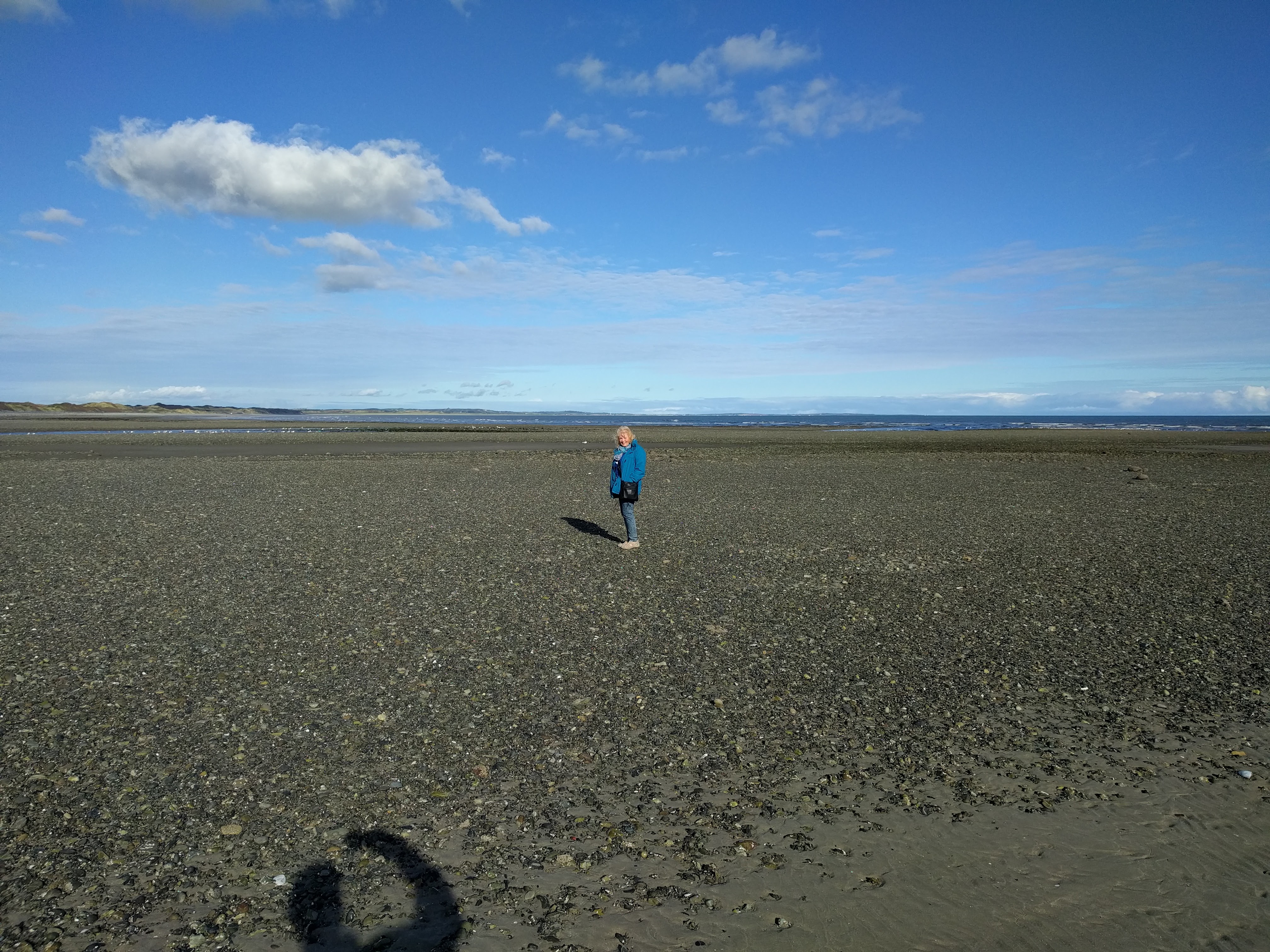 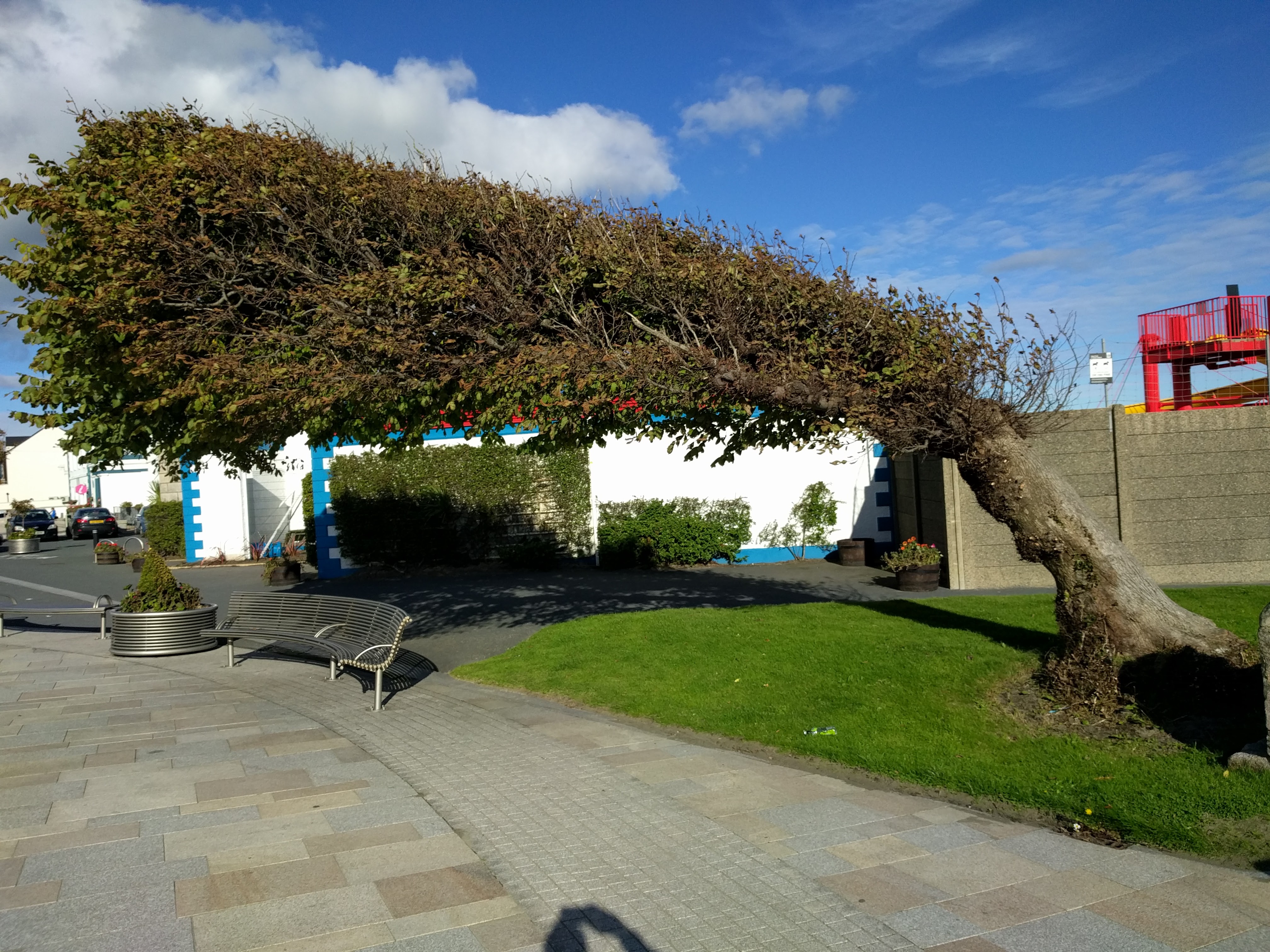 The stone walls, the green, the sheep, the sea. 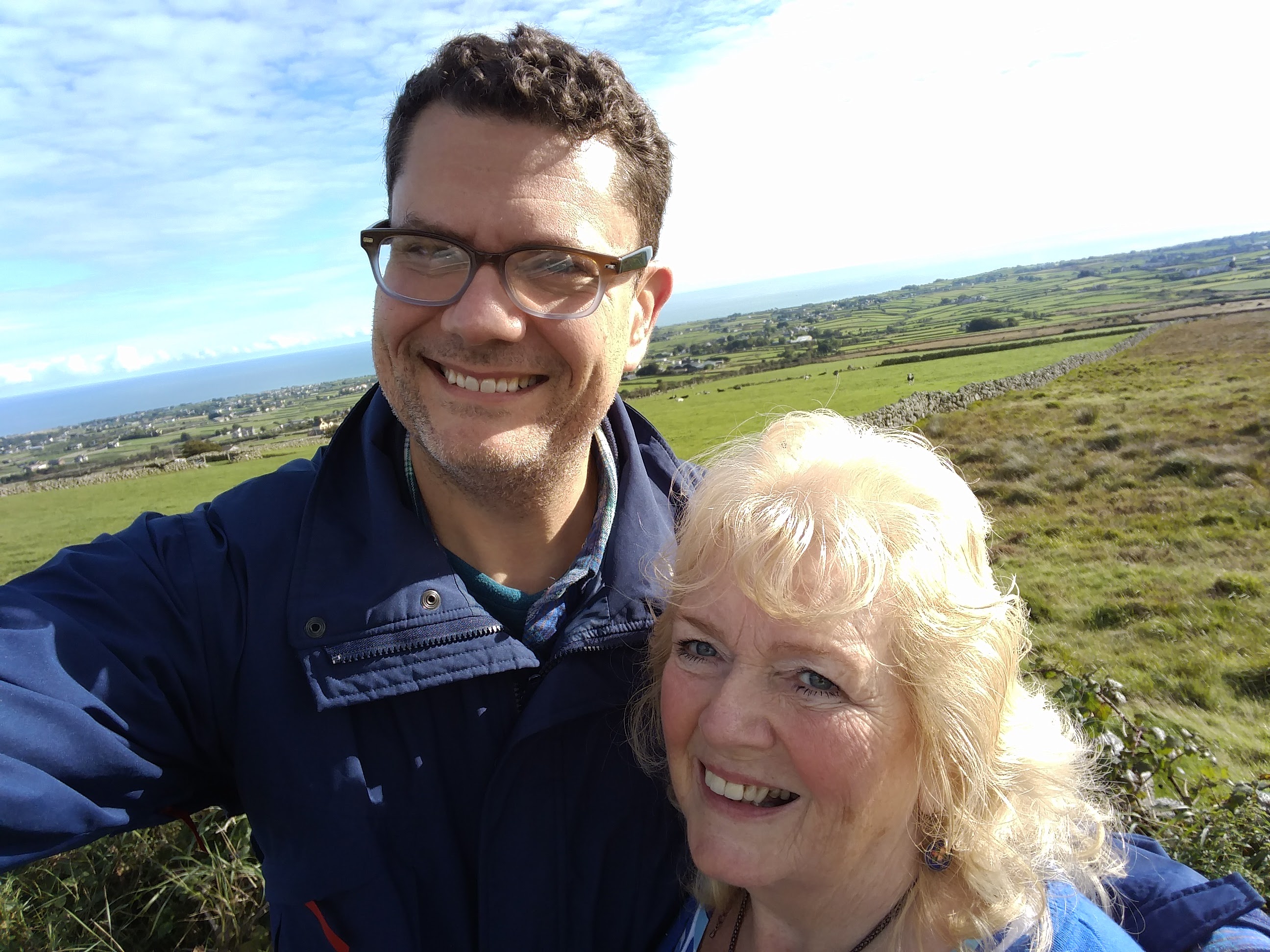 Jenny and Me. Do not, I repeat, do not be jealous of my sweet dad-windbreaker, I implore you. 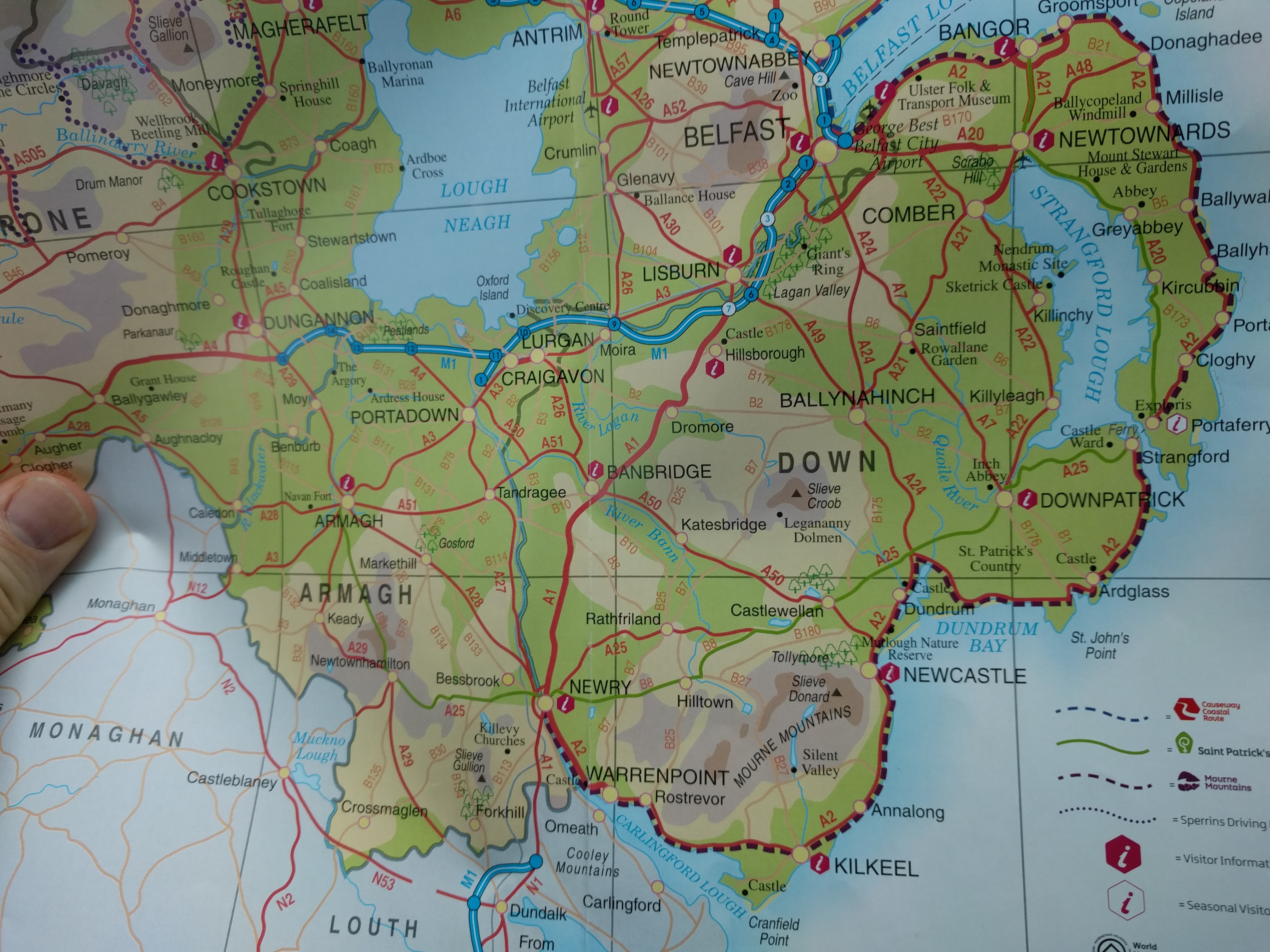 A map.  Mourne Mts are at the bottom, Portadown is kind of in the Middle-West, under Lough Neagh.  Belfast and Bangor, Northeast.