I knew a woman who for awhile had a blog called “across from me” where every day she’d post a picture she took of people on the subway sitting across from her. I thought that’s a good idea, to have a theme — a hook — for a blog. But that’s all it was. I think she doesn’t update it anymore. I tried for awhile. I’ve taken a few pictures of people on the subway. But mostly I’m too self-conscious. once, in fact a guy told me to stop taking his picture. This wasn’t on the subway but on Coney Island. I was taking a panorama shot, and he was in the way. Big ol cranky guy. He said “not everyone likes having their picture taken.” Heh. Vain fella. He was just in the way of the sunset.

I did take a ton of pictures in New York City. Hundreds a week. Here in NC I’ve only taken a few. Maybe 40 since I’ve been here. Another thing I haven’t done much is get on social media. I’ve enjoyed the break. Sometimes maintaining a social media presence is a job all by itself. But I worry if I am losing people — losing my friends, losing my audience — in some ways losing myself. It’s weird to have our relationships curated by a big corporation. It’s unnatural. And then there’s a fear of non-response. I don’t like feeling this way but there’s the “what if I click ‘like'” and they don’t respond in anyway?” Feeling. I’ve been on both sides of that feeling. Ignoring on Facebook and being ignored. One fan from way back sent me a friend request and I wrote him back and apologized but told him I wouldn’t accept because I was trying to separate my personal page and my music page. I asked him to “like” my music page instead, but he didn’t. I was kind of irritated. I wanted the connection, but couldn’t rightly call him a friend. I guess people want that more personal connection. I’ve been guilty of the same thing. “Friending” people I don’t know that well. Once I wrote a fan email to Ann-Margaret, in the pre-facebook days. Her assistant wrote me back and said “believe me, it is appreciated.” Heh. That’s a different thing though. I have some people on my facebook feed I barely know, or do not know at all. Facebook had a thing where it would show you how many “likes” or reactions you had clicked or produced, and my number was astronomically, depressingly high. I didn’t like it. So I’m enjoying spending less time on facebook. I hope I can keep my audience though. And, of course, my friends.

So here’s a picture I took on the subway — a Manhattan-bound B train. The guy might have been taking his dog to the vet. He had a lot of nervous energy and kept nuzzling, petting, and canoodling with the dog. He seemed worried. The woman is interesting-looking too. I always like seeing people read on the subway. If I saw someone reading on the subway I’d try to go sit as close to them as possible, because their presence was invariably calming, as opposed to the majority of people hammering away at or yammering away on their phones. There’s something grounding and soothing about a person reading a book. A book makes one more present while smartphones seem to take us out of the present. 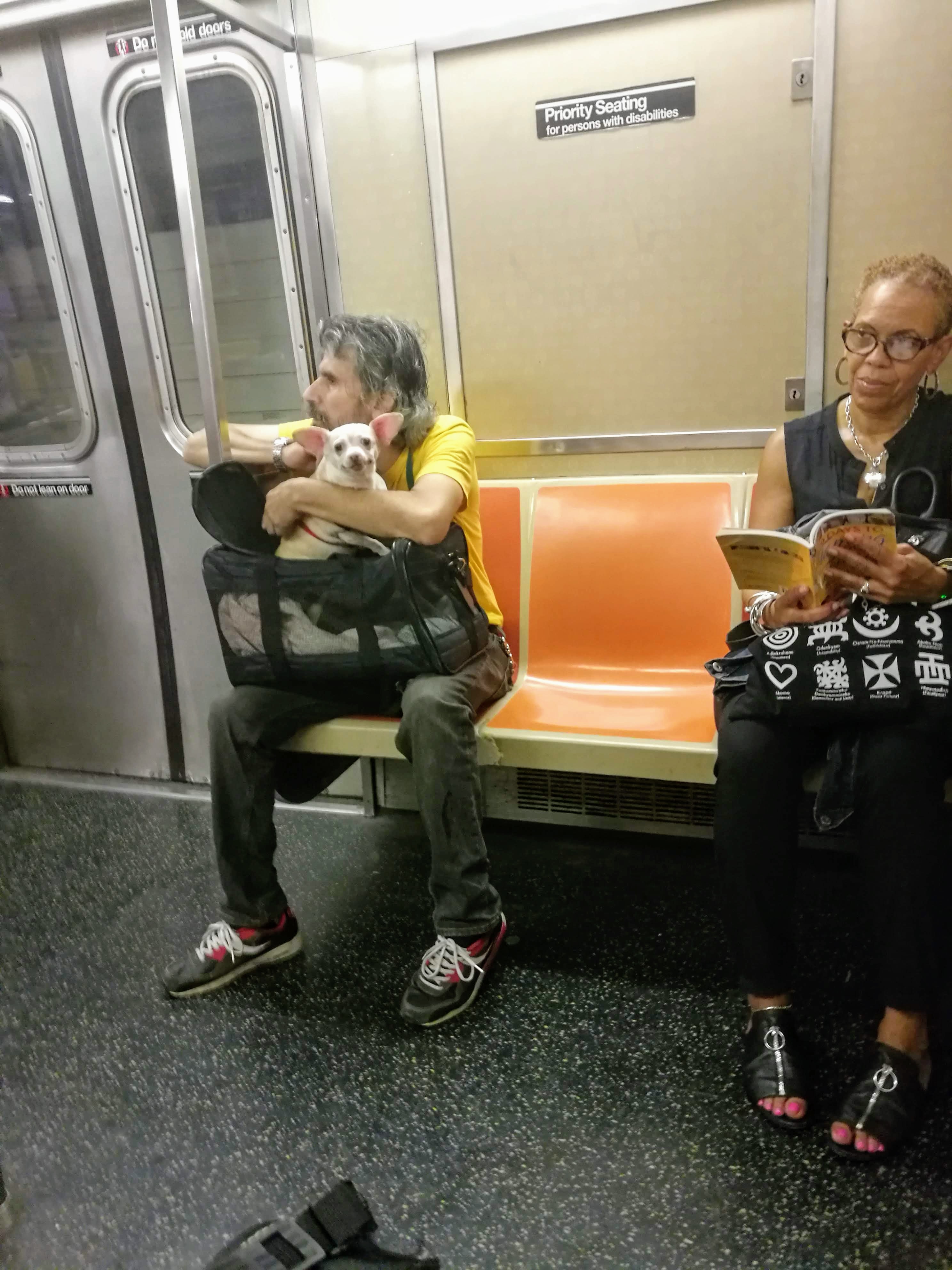 3 thoughts on “Across from me”