I do a fair bit of writing on Facebook. Today I’m cheating a little bit (hey I wrote these introductory sentences!) on my writing-every-day challenge and posting something that I posted on Facebook back on July 6.

I wasn’t originally going to do anything for July 4th because I was tired. But then I decided I needed to get out of the house, so I went for a walk. On the sidewalks, people were out. They had little grills set out, were grilling hamburgers and hot dogs, Boom boxes playing mainly salsa and merengue. And the most quintessentially NY-summertime thing: A fire hydrant which had been opened up and was spraying water (“Champagne of the Catskills.” (Come on, you *know* New Yorkers got to be arrogant about their water. And I’ll admit it’s pretty good.)) through which kids in their bathing suits were running. Lawn chairs set up for the older folks. You could see each generation, from grandparents to little children.

Then I walked to Prospect Park, which is a familiar destination. Usually it’s peppered with a few people, but it was *packed.* It was *teeming* with crowds of people. Barbecuing. On one side of the path was a crowd of West Indian and Jamaican people, listening to Reggae and hip hop, and on the other side a throng of Latinos listening to merengue and — I guess you call it Norteno. Mostly families. There were a few white folks peppered here and there, not many. Mostly single and mostly younger than I.

I had something in my shoe and sat down to get it out, and started to pray and meditate and as I did and as I started to breathe, I started to feel a part of it all, not apart. There was a joy. I’m so used to New Yorkers being on their way somewhere, disregarding each other (In Manhattan there is a culture of being seen — In Brooklyn there seems to be a culture of disregard, or of keeping to yourself and your own.) But there was a palpable joy. People were just enjoying each other. People had their guards down. Kids running around. And — this is probably a lot less fraught with meaning than I am making it — but to me it was very meaningful: People in American flag garb. I know things go in and out of fashion, but to me, desperate to love and believe in my country, I seized on the meaning which inhered in the American flags emblazoned on folks’ t-shirts, shorts, bandanas and bikini tops. I saw a whole family decked out in red white and blue. They had obviously coordinated and the girls had red white and blue ribbons in their hair. I don’t know how much thought these people put into the meaning in their outfits. Maybe they just did red white and blue cause that’s what you do on July 4th, but I took great comfort and encouragement in it.

There was a family who kept taking turns taking pictures of each other and I offered to take a picture of all of them — usually something I offer to tourists, but I knew these people were not tourists. They were Brooklynites — my neighbors. They accepted, and it felt good, as it always does, to offer this service. I counted, like you do. 1, 2, 3. They were gorgeous — glowing. I handed the phone back and they thanked me, flipping through their photos.

I continued walking to the monument to the Maryland 400. The Maryland 400 were a regiment of soldiers who saved the American army in the battle of Long island by holding off the British long enough for Washington to escape. Washington did a bunch of escaping, not least because the British didn’t have the heart to pound us into dust when they had the chance — they hoped that by treating us with kid gloves we’d eventually surrender.

I know we are a nation of contradictions. I remember the British Lord who remarked about the irony of slaveholders howling about liberty. We’ve always been hypocrites, from the get-go. We never live up to our ideals. We think pretty highly of ourselves. American exceptionalism can be obnoxious.

And yet, the ideals are there and men and women did die for them. Is it naive of me to think that I am free and that I am free because men and women died for my freedom? I do think that. Is it naive and romantic and simplistic? I know it is. But we are an eminently decent and generous people. And we can’t give up on the best vision for ourselves, even when — especially when — we fail to live up to it.

I snapped a photo of this monument and then I walked home, encouraged. Encouraged by the multitudinousness of humanity. Encouraged that a teeming cauldron of people can, did — for me, anyway — emanate pure joy. That we can believe in America, for a minute anyway. That the American Spirit isn’t dead, the experiment persists, and is worth fighting for. E pluribus unum.

PS: If you want to read a great book about the Maryland 400 please check out “Washington’s Immortals: The Untold Story of an Elite Regiment Who Changed the Course of the Revolution.” A *great* book. 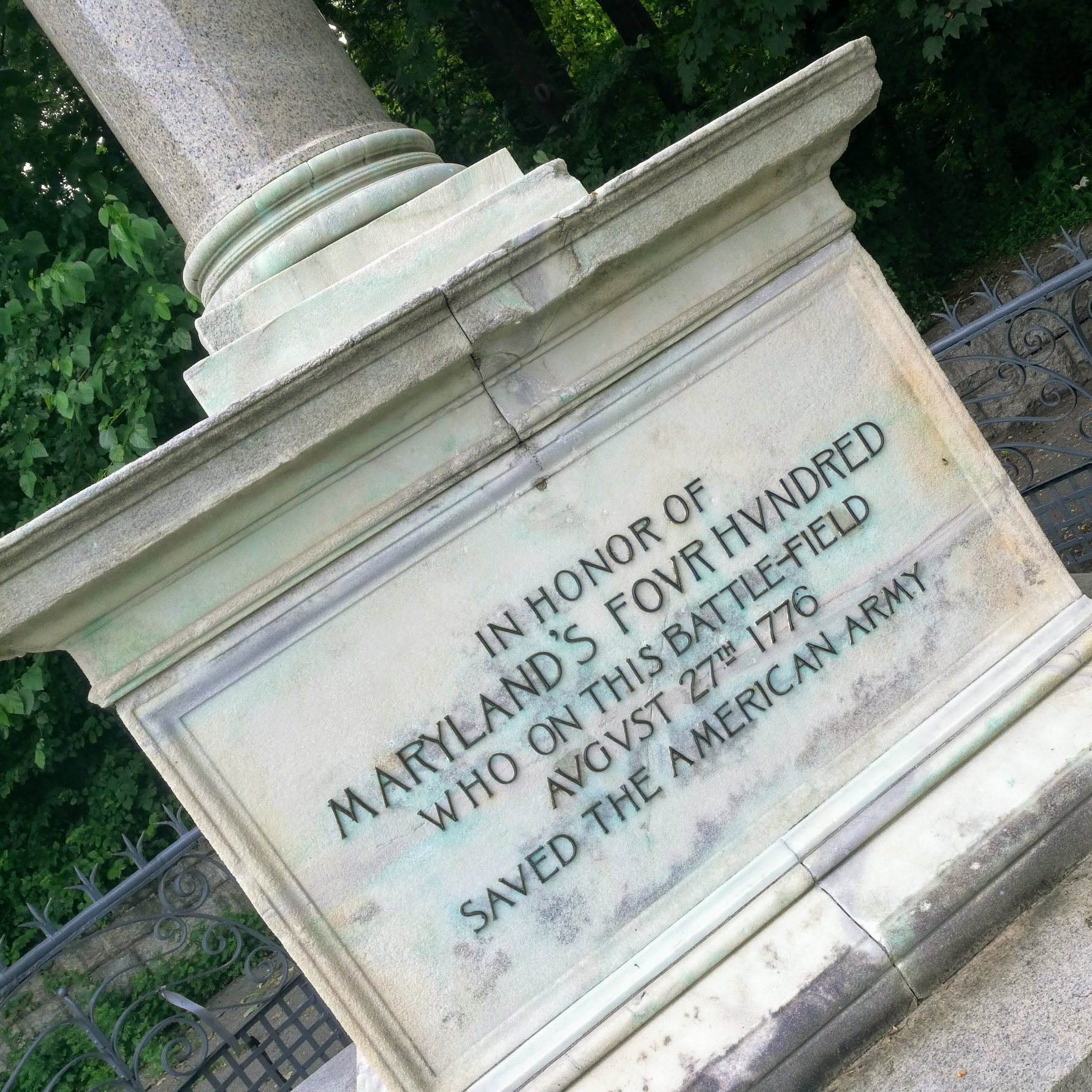