At the Hertz I was to rent a minivan to pack full of everything I own and then to drive to North Carolina. Hertz, incidentally, is the origin of the yellow taxicab. That is, the traditional taxicab yellow comes from Hertz. Or something. There’s some trivia I vaguely remember. Old school trivia — that is, not from the internet. I could google it of course but then that would break the spell. Remember knowing something just because you know it and not because you just looked it up online? I barely do. Today’s kids probably don’t. I think I remember the Hertz trivia from playing trivial pursuit. I used to play trivial pursuit with my old music partner Brian Funck on long road trips. We’d just read the cards to each other, we wouldn’t use the board or pieces or anything.

There was one woman in front of me in line, and one woman behind the counter, on the phone. Jenny. Her name was on a placard. I was feeling a bit nervous. I had booked a minivan ahead of time online and called the manager of the Hertz to make sure a minivan would be available on the day of rental. “Well, I can’t make any promises,” said the manager. “Why not?” I said. “I booked a minivan, why can’t you give me a minivan?” “Sorry,” he said. “We don’t know exactly what we’re getting each day so we can’t be 100% positive we’ll have a minivan. But we usually have minivans.” “Ok,” I said, frustrated, but not frustrated enough to book an actual moving van from U-Haul. I would take my chances with the likely minivan, which was relatively cheap. $217 for one day, compared to over $800 for a U Haul. One part of my nervousness was not being sure if Hertz would have a minivan. The other part was, once I had a minivan, would it hold all my stuff, or would I have to leave some behind? When I moved from Queens to Jersey City I had to leave a lot of stuff behind, including a crate PA which both sounded good and had sentimental value. But that’s another story.

Jenny got off the phone and started helping the customer in front of me, who wanted an upgrade. This was interesting. This woman was not content to receive the kind of car she actually booked, she wanted something better, and what’s more, acted like she expected it. “You’re gonna give me an upgrade, right?” She said. Jenny said sorry she couldn’t do it this time. I don’t remember the conversation, but the gist of it was, the customer usually got an upgrade for free, and this time wasn’t getting one at all, and she customer wasn’t happy. I was surprised and a little annoyed at how entitled she seemed, because I was going to be happy and relieved if I received the kind of vehicle I had actually booked. The customer complained loudly and left in a huff.

I stepped up to the counter. “Wow, she was spoiling for a fight,” I said. “Oh her? She’s always like that.” said Jenny. I thought that I liked Jenny. Equable, stoic, unflappable, somewhat sphinx-like. She seemed like a decent Hertz representative, and in fact in my experience all Hertz representatives are decent. “I rented a minivan,” I said. “Yep, they’re bringing it up. Just let me scan your license and credit card.” And she made a copy of my license and credit card, then handed it back and said. “You’re all set since you paid online. You can go outside and wait.”

I went outside. Soon a man drove a grey minivan up to the curb. All my anxiety melted away. The minivan was a gleaming grey ship. I looked inside. It was huge. You could sleep a family of six in there. All my stuff would fit in there perfectly. I thanked the man, got in, and drove away, very carefully. I drove very slowly, obeyed all the laws, letting so many pedestrians pass in front of me against the light. People behind me were impatient, honking. Sorry. Pedestrian always has the right-of-way. I wanted to take my time. My last time driving in Manhattan.

I made my way down the West Side highway, also known as the Henry Hudson Parkway, which is right by the Hudson river, and then got in the lane for the Battery tunnel. It’s officially called the Hugh Carey tunnel but you could put a gun to most people’s heads before they could be bothered to call it the Hugh carey tunnel. I just realized how offensive that might be to the Carey family. Sorry guys. But you know, New York New York. It’s a wonderful town. The Bronx is up and the Battery’s down. There’s no Hugh Carey in the song.

On the way to the tunnel I snapped a picture of the Freedom tower. Incidentally I always hated that name. Never let George W. Bush name your architecture. Ok he probably didn’t name it but it sounds like he did. That was a bad era for us. The immediate post-9/11 era. I have strong feelings about it that I won’t get into here, but you can probably guess what I think by the fact that I hate the name “Freedom Tower.” 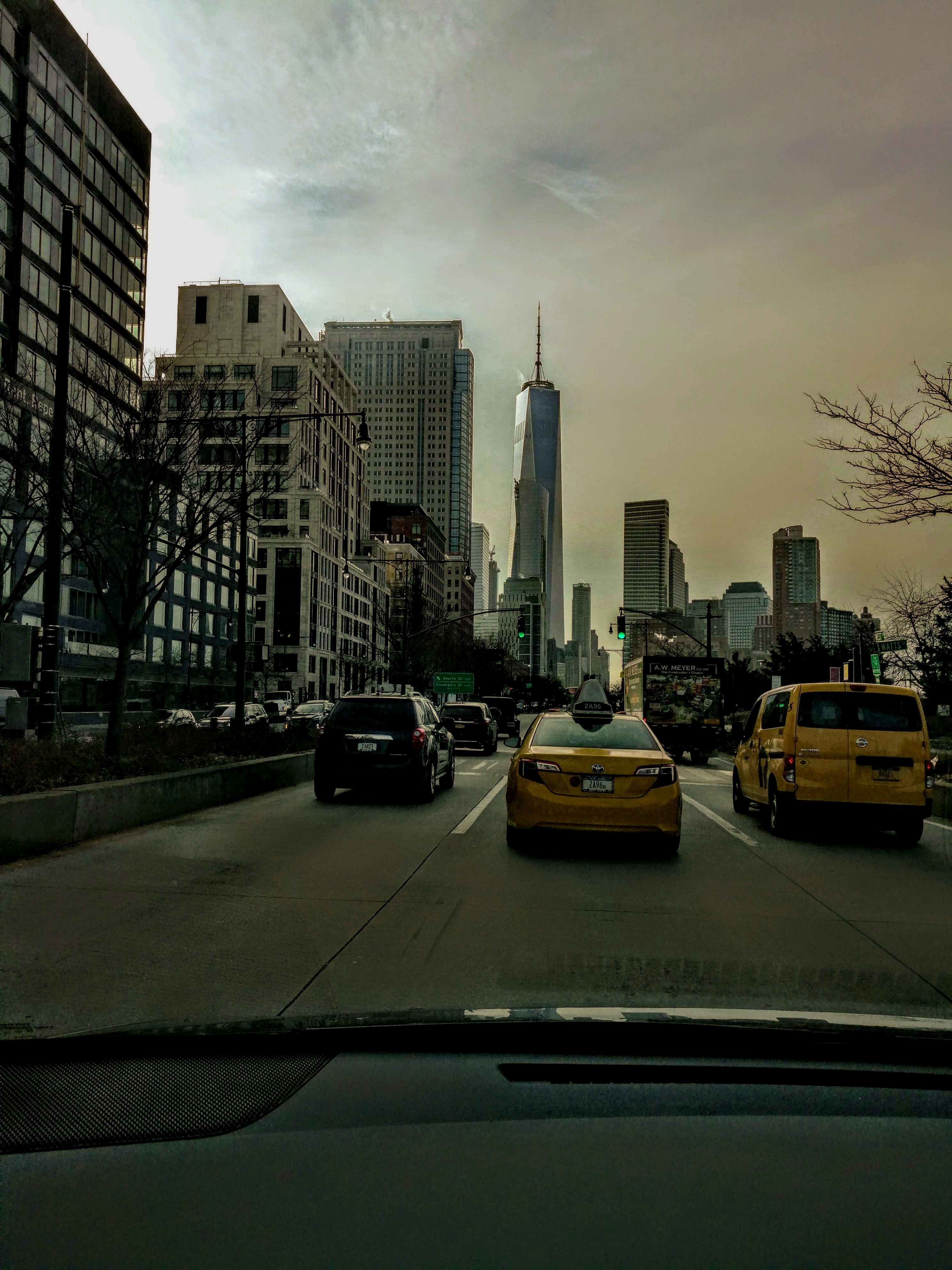 Freedom Tower on the West Side Highway.