I took a bike ride. On the bike I call mine, which I think is mine. My friend Jay Datema gave it to me, or lent it to me, but I don’t think he expects it back. Jay has, or had, a job in Manhattan, and rode the bike, a rusty brown Schwinn, over the bridge. I don’t know which bridge. Brooklyn, Manhattan or Williamsburgh. The bike has a wimpy bell, and Jay bought a more sturdy bike with a more commanding bell. So he gave me the old Schwinn, which I love. Jay’s a librarian. He loves books and music, and owns a Brownstone in Park Slope along with his wife, Jessica. I’ve known both of them since college. In fact, Jay lived next door to me in Saint Dorm, named after Missionary and Jungle Aviator Nate Saint, who was killed while trying to evangelize the Huaroni people in Ecuador. I had a Christian Comic book about Nate Saint, Jim Elliot and the rest of the crew who were killed. They are evangelical royalty.

Anyway, Jay loved music and was always listening to obscure British bands from the 4AD label. He smoked Dunhills and was a literature major. My taste in music was less cool. I liked old bands from the 60s and 70s. Well, I liked a few new bands/musicians like U2, the Samples, the Judybats, Bob Mould, Vic Chesnutt. I was just getting into songwriting then. Just discovering myself, starting to write good songs. I was listening to a lot of Bruce Cockburn. I had a Bruce Cockburn songbook with tablature and studied the way he played guitar. His right thumb was — is — like a jackhammer. All fingerpickers use their thumb, but Cockburn’s is especially forceful and dynamic. I studied his lyrics too. I’m sure I stole a few lyrics from him. I love Cockburn’s images. The way he is so generous with them — he just throws beautiful images around with lavish abandon.

I didn’t like going out, and was probably depressed. I didn’t do so well at Wheaton College. I slept in the day and went out at night. I smoked. We weren’t allowed to smoke at Wheaton. But I had friends, and girlfriends, and made music with my friend Brian Funck, with whom I went on to form a music partnership. It was so full of magic then. Life was so full of discovery and feeling. I just felt everything so deeply. And yet. And yet I was paralyzed in strange ways. I didn’t know how to be an adult. How do do things like wake up and go to class and do what you’re supposed to to. I learned that much much later.

About a year later, my friend Diane, who is a writer, wrote an acrostic poem based on my name, which I treasure. I don’t remember the whole thing. The “A” was “Awed and open as a babe,” and the “O” was “On a journey coaxed from dream.” Phew. On a journey indeed. Oh Diane.

So my bike ride. On Jay’s Schwinn, I went down my street to Prospect Park. There is a dedicated bike lane, but vehicles don’t really pay attention. It’s common to encounter 3 or 4 vehicles idling in the bike lane on the way to the park. I have a bit of a cold so I was sucking on zinc lozenges. Something was stuck in my wheel and I had to pull over and turn the bike upside down to figure out what it was. A man walked over to look at it with me. He was dark-skinned, wearing glasses and a ball cap. I think he was Dominican, but I’m not sure. “That’s your problem, right there,” he said, pointing to a bungee cord which had gotten tangled in the gears. “Thanks, I said,” and he walked away. It took me a minute or so to yank the thing out and I was on my way. I saw the man again a 100 yards away or so and nodded at him, but I don’t know if he recognized me. He didn’t react. I rode on to the Park. 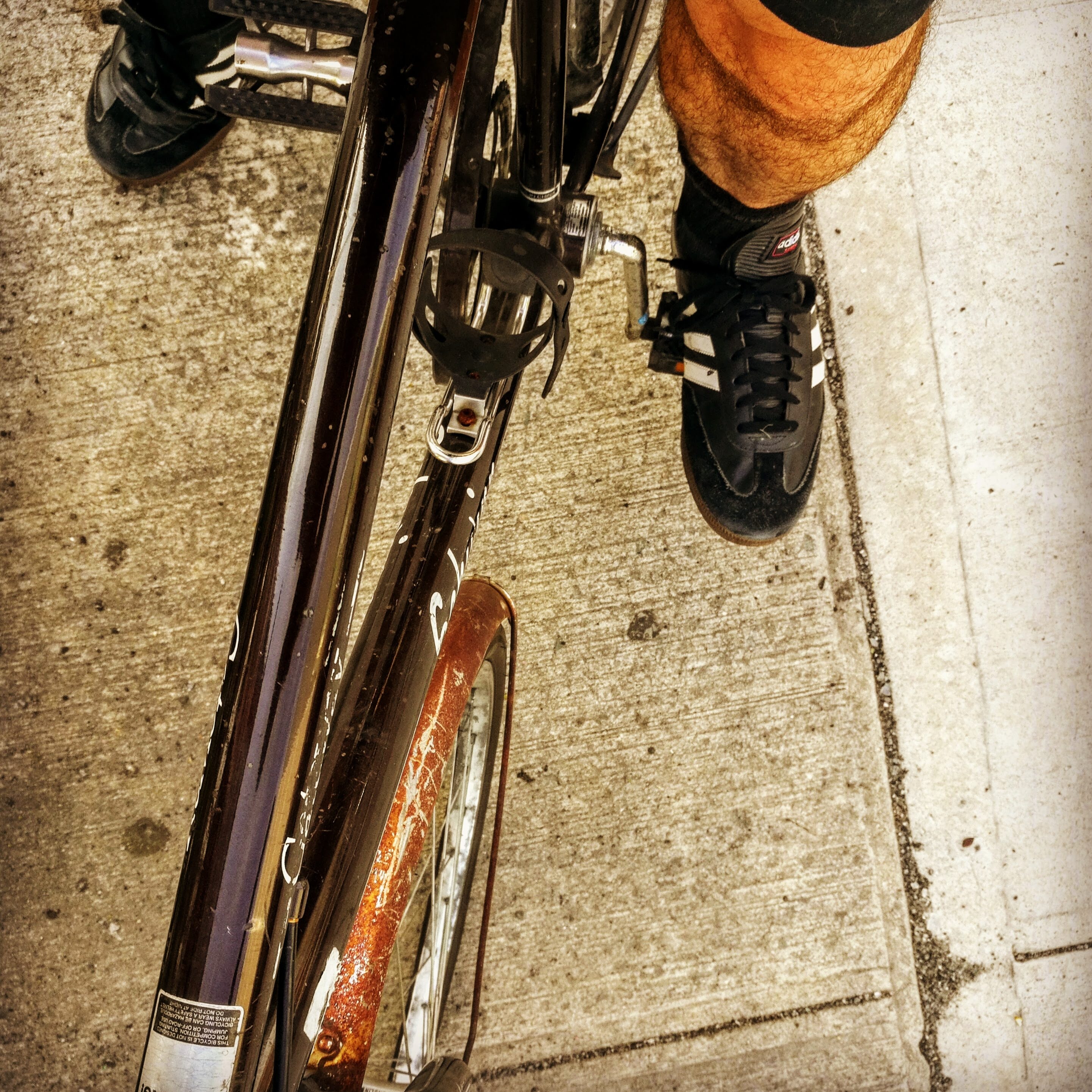