I played a show last night. Well, a set, at the Owl Music Parlor, a quaint and cute listening room in Brooklyn, lovingly run by Oren Bloedow. Oren’s in a terrific dreamy band called Elysian Fields. I suppose every folk/rock listening room is run as a labor of love, but this one seems particularly love-infused. For instance, while the music’s going on they curtain off the music room and the people in the bar are shushed while the music is playing. They don’t serve drinks in the room where the music is playing. You can go get a drink and bring it back, but they won’t bring it to you. The whole night, Oren’s going back and forth, making drinks, washing dishes, running sound, passing the tip jar, and playing music with the performers. You can tell his soul is in it.

Larry Gallagher, who invited me to share the show with him, played after I did. I love Larry’s music. I’ll post one of his songs at the end. Larry’s as good a songwriter and musician as I have heard. He’s originally from NY but has lived in San Francisco for a long time.

I had a really good time last night and woke up in a haze of gratitude and longing: Gratitude for the warm community I experienced last night, and longing for more of it. I didn’t feel that I necessarily performed that well (although friends say I did), but I just felt. good. Good seeing people, being with people, being part of a community, no matter how tenuous that connection may be. Some college friends came I hadn’t seen in a while. I was part of a really special community of friends in college, and it brought back, good warm feelings seeing some of them again. It was good sitting at a bar talking with good people in a warm, well lit room, walking home in the crunching snow carrying my guitar. Just feeling grateful to be alive. Not because I played so well or wowed the crowd. I didn’t. I mean, I don’t think I did. But my fear and anxiety about how well I performed were subsumed in feelings of gratitude. It’s 10 to midnight and I have to finish this post quickly if I’m to stick to my plan of posting something every day. I’m very tempted to not post this because I like to edit stuff. But I’ll post this unedited. Good night! (whoops it’s 12:06 now because I had to go back and fix a couple of things. ah well. missed it by that much, chief). 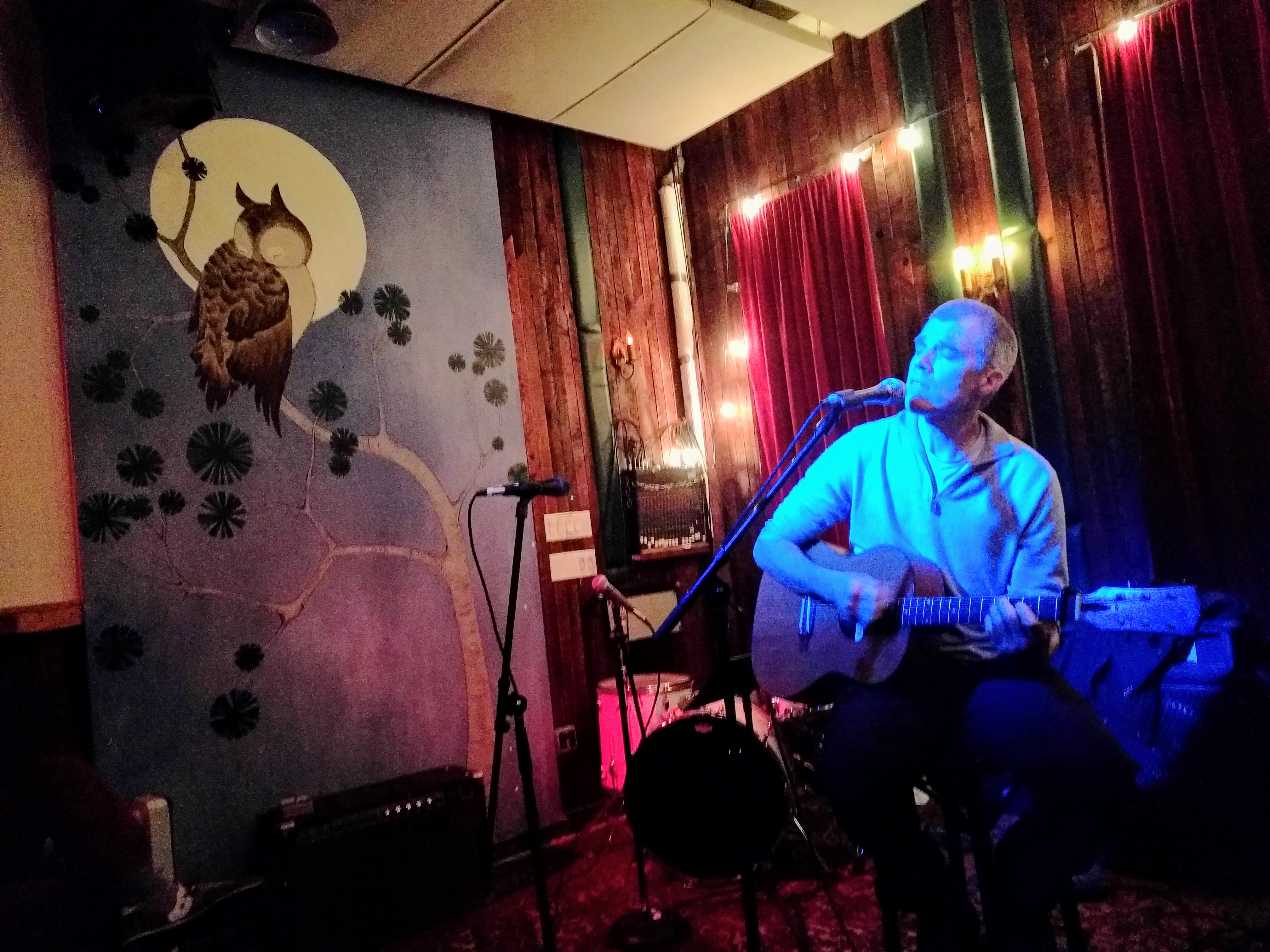 Larry Gallagher at the Owl

Here’s a song in which Larry’s mordant wit is on full display. A song called “TV is Your Friend,” written from the perspective of TV.

“TV is Your Friend

Don’t think this I don’t see you eyeing me
After everyone has gone?
Behind that pout I know you’re dying
To cross the room and turn me on
Within an hour you’ll have fallen
Why do you sit there and pretend
That you have found some higher calling?
TV is your friend

It makes me sad to watch you churning
Still you treat me with disdain
Do I not take away the burning
Do I not numb you to the pain?
You know you love the way I flicker
My pull you’ll never comprehend
Not as strong as heroin, but quicker
TV is your friend

4 thoughts on “Last Night at the Owl”