I was walking down West End Ave Last Saturday night after a gig when I saw it, on 100th street: a phone booth. I stood there and stared at it, then I took a picture of it, then I got inside and picked up the receiver. A lusty dial tone. It worked. I was excited to find this relic of a bygone time, not in the corner of a convenience store parking lot in, say, Indiana, but here, undisturbed, and only slightly (almost tenderly) defaced, on a Manhattan Street corner. It was a little jarring — slightly breathtaking, like seeing a deer or Lucy Liu. I inevitably thought of Superman changing — specifically, the version played by good old Christopher Reeve, who took my breath away in the 1978 movie and from whose era this phone booth seems to have come. 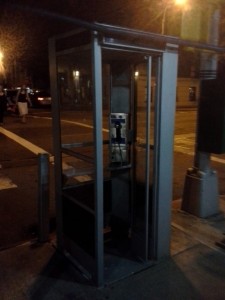 Some Googling tells me that the freestanding, outdoor, 4-sided phone booth I breathlessly stumbled into is one of only 4 left in all of Manhattan. All four are on the Upper West Side’s West End Ave (there’s another on 101st that I walked past without noticing). No one seems to know why only these four remain. It’s due either to the generous caprice of a Verizon executive, the tenacity of a few preservation-minded residents, or the klout of a Hollywood executive who demands actual phone booths to lend his films veracity. Incidentally, there *was* a movie called “Phone Booth” set in Manhattan, but instead of using a real phone booth they built a fake one, on 53rd and Broadway, before deciding New York was too cold, whereupon they moved the whole production to L.A. That movie contains the immortal line “hang up the f#@*king phone,” which, in a world full of cell phones but devoid of phone booths is something we’ve all wanted to say.

(Update: I was just about to hit the “Publish” button when I chanced upon this terrific article, which tells us that we owe the continued existence of these West End Ave phone booths not to any Hollywood mogul but to the persistence of a “self-described pay phone buff” named Alan Flacks who seems to have devoted his life to lobbying Verizon on behalf of his beloved phone booths. )

3 thoughts on “The Last Phone Booth?”