I’m back. After 35 days, 22 shows, 14 states, and 7200 miles, we drove into New York City, exhausted and cheering. I dropped off my stuff, smoked 2 cigarettes even though I don’t smoke (and I mean that), said goodbye to my bandmates/friends, gave the ancient rented brown minivan a good washing, returned it to its owner, took the train back to Jersey City, hurried my sub-letter out the door, and slept. Oh goodness how I slept. I slept my face off as the rain poured on the black asphalt outside. Now the future is a glowing sun on the horizon, and I’m trying to figure out how to grab it and stuff it in my shirt pocket before it sinks.

Thanks to my amazing band/tourmates, Gerko, Rachelle, Paul, Toby, and Joan Marie! Thanks to everyone who hosted, housed, fed, put up with, and came out to hear us.

see you out there. 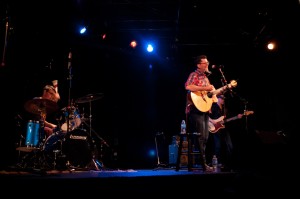 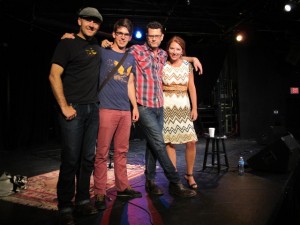 That’s what they say at the yoga studio where I go sometimes. They have free yoga on certain days. It’s the same studio where Alec Baldwin’s wife, Hilaria Thomas, teaches. Hilaria started saying “inhale….. aaaaaaand exhale,” and all her fellow yoga instructors thought it sounded pretty good so now they say it too. Except the one teacher I like pronounces it “axhale,” Which isn’t extremely relaxing (but she’s still a great teacher). I can never do the poses. Once I thought the teacher said “awkward facing dog,” and I thought “finally, a pose I can do.” Sometimes I fall asleep and once I even started snoring, until I was awoken by the tittering of my fellow yoga students. anyway…

After about 2000 miles of careening around the country going from concert to concert in a rented minivan full of tightly packed gear, vinyl records, and an assortment of bandmates and one bandmate’s lovely wife, I’ve hit a lull, wherein I’m hanging out all by my lonesome in a lovely green leafy backyard full of little yellow birds and flowers-whose-names-I-don’t-know-the-names-of exploding in color. My only companions for the next few days will be two big slobbery dogs and whoever accepts my invitation to get together for dinner. There are no miles to drive, no tolls to scrape change together for, no starbucks runs, no gear to set up or tear down, no charts to correct, and no gigs to play, (until this Saturday). So I’m breathing a bit.

(But only a bit. I’m also tryin’ to get some publications to review the record, and trying to get folks to come see us in Boston and Carrboro. That’s the thing about this line of work. There’s *always* too much to do.)

Ok, and since I haven’t officially said it, *THANK YOU!!!!* to all the lovely people who hosted my bandmates and me over the last 2.5 weeks, for feeding us, housing us, and being so generous. Thanks to everyone who came to see us play, hung out, donated generously in the tip bucket, and bought records. Thanks to Toby, Paul, Gerko and Rachelle, for playing and traveling with me, doing sound, lugging gear, making schedules, making profit-and-loss spreadsheets, handling merch like a boss (Rachelle), and putting up with me when I misplaced the car keys. Thanks to Blake Gingerich and Tonieh Ellis for filming me a bunch (curious to see how that turns out) and making me feel like L.L. Cool J. Thanks to the Hazletts for awesome digs and hang time in Amish OH. Thanks to Joans Sr and Jr for awesome digs on Lake MI, the Yawgers for lovely digs in PA, and the Dill/Marsters for lovely digs in MA. Thanks to the fans for wanting to take pics with me and, again, making me feel like L.L. Cool J. I don’t have time or space to thank everyone who made me feel like L.L. Cool J, cause it was a lot of people. Thanks to each of the 7 people in Camp Hill who told me, throughout the morning, not to forget my guitar. I remembered it. xoxoxo Jason

(there are more tour dates to come, in NH, Boston, Carrboro, NC, DC, VA, and Atlanta. please come see us! And, if you like, preorder the new record, officially being released in August). 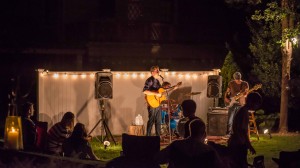 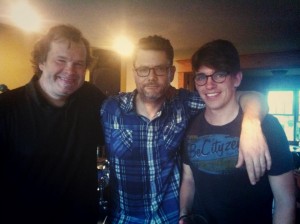 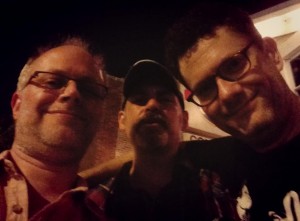 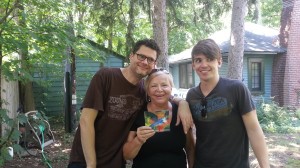 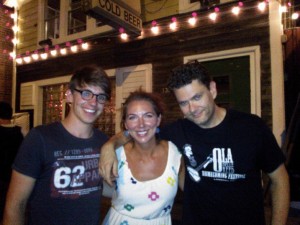 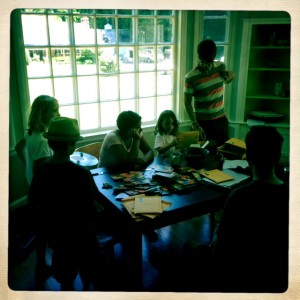 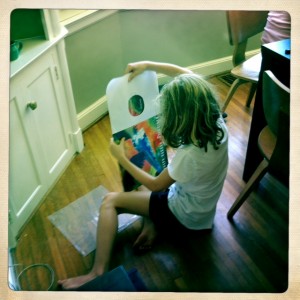 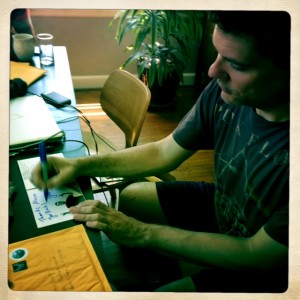 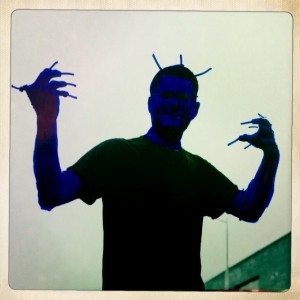 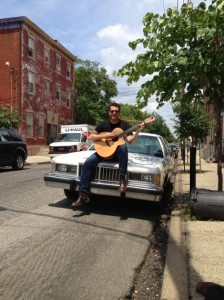 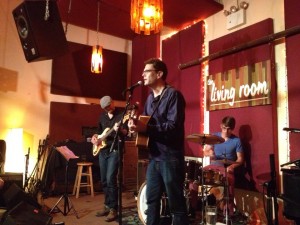 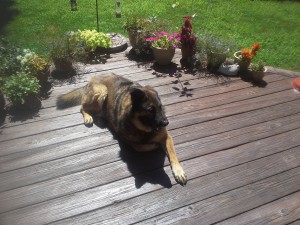 We are continuing the series of guestblogs with this one by Brian Porick, who came out to see us in Geneva, IL. Thanks Brian!

‘I had the privilege of catching Jason Harrod play a backyard concert in Geneva, IL thanks to our gracious hosts, David Jennings and his family.  This was a rare opportunity to see Jason play with a rhythm section, something that I’ve never seen in over fifteen years of attending his live performances.  Drummer Gerko Tempelman and bassist Toby Hazlet adequately supported Jason, although it seemed as if both guys were still in the process of learning Jason’s tunes since they tended to lean on simpler patterns (which is understandable this early in the tour.  I’m hoping for the sake of the hard core fans that Toby can make it a goal to pull off the amazing bass riff from the second verse of the recorded version of “Siren Song.”)

Fans were treated to just shy of twenty tunes over two hours, a nice mix of classics (“Waiting on My Day”, “Siobhan”, and “Carolina”) and songs off Jason’s new record, “Highliner.”

Speaking of the record, it is more of a musical descendant of Jason’s Americana-heavy “Living in Skin” than the most recent “Bright As You” album, with its Nashville polish.  Here you find eleven tracks that are largely up-tempo yet lean harder on folk forms and arrangements.  However, instead of being strictly two-step rhythm section treatments, the album blooms (especially in its back half) with tasteful strings and woodwind support, adding a lushness that no previous Jason Harrod release has achieved.  Even long-time tour novelty song “Nemo Incognito” gets its appropriate treatment with its grooving tempo against a fantastic 60’s TV theme song string arrangement, managing to sit nicely alongside folkier fare such as “When I Came Down Off the Mountain” and “One of These Days.”  This album is full of top-drawer Jason Harrod songwriting while also moving his recorded sound forward, and will be an enjoyable listen for newcomers as well as old-timers.’

It’s hard to imagine a bigger contrast than the two latest shows on this Highliner Pre-Release Tour. We went from an intimate house concert, generously hosted by the Hazlett family in beautiful rural Millersburg Ohio, to a backyard concert in a pretty neighborhood in the outskirts of Madison, Wisconsin.

The unifying factor was Jason’s music that took us, (that is: Toby, the bassist, my wife and me, the drummer) on this musical journey through the country. On that journey, we met up with a wide variety of people, that traveled up to 2,5 hours to come and listen to Jason’s performance and to buy his new record.

As Kaitlin Vosswinkel described the concert in Madison: ‘It really felt like summer at Jason’s backyard performance. Between a cold beer and amazing live music, it was the nicest night out.’

For me personally, it’s a great experience to hear the life stories of people being linked to Jason’s musical travelog and as a band, to connect that blend of stories in the performance of Jason’s journeying songs.

As Zedrich Clark, our first Vinyl buyer(!) in Millersburg reported: ‘My wife and I loved seeing Jason live and hearing the stories of his inspiration for certain songs. (…) his simple, yet universal words resonate on many different levels of the spirit’.

Also, here’s a great description of Jason’s music by Neal Brian Patel who came to Madison: ‘I keep coming back for more because Jason’s music always follows the same winning recipe:  3 parts brutally honest grappling with the struggles of human experience, 2 parts undimmed hope of redemption, and a generous pinch of humor to taste.  Then mix it all up with Jason’s unique brooding vocal qualities and his diverse guitar skills and you have a great combination.’

From July 12th through August 15th, this blog reports about the new album Highliner Pre-Release Tour!
Check this short promotional video out on the tour and the album: Jason Harrod – Highliner. 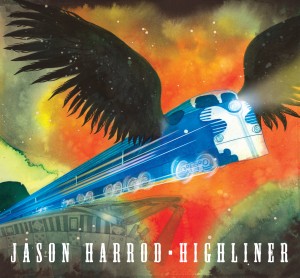 Hope to see you out on the road!